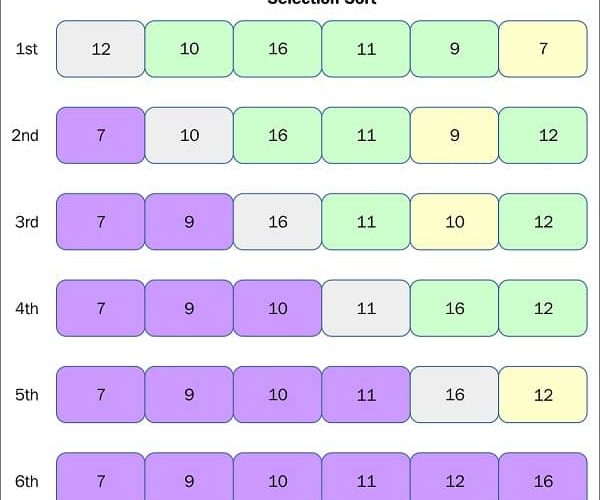 In a nutshell, sorting is nothing but arranging data in a particular fashion. The selection sort is a popular sorting algorithm. In this blog post, you will learn Selection Sort In Python.

In Selection sort, First and foremost the list is divided into two parts left part being the sorted which is initially empty, and the right part unsorted which at the very beginning is the entire list then at each step elements are recursively compared and swapped depending on the condition till the list is entirely sorted.

Similarly, for sorting a list or array in descending order, we need to find the maximum element and swap it with the first element, and so on. Since at each step we are selecting the next element for the sorted list hence named selection sort. Below

Algorithm For Selection Sort In Python

In the above program, the start the position is initially 0  at each iteration it keeps increasing till the limit len(l), at every iteration when the nested loop finds a smaller element than the element at the position start the values get swapped this continues until the entire list is sorted.

For an unsorted sequence of length n the algorithm requires n step for the first scan then at each iteration it reduces by 1. Mathematically this can be expressed as,

The above expression concludes that this algorithm is proportional to n2. Therefore for a given list of size n, the time complexity of selection sort can be expressed as,