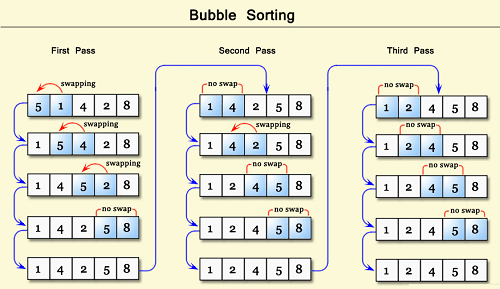 What is Bubble Sort Algorithm?

Bubble sort is a simple sorting algorithm. This sorting algorithm is a comparison-based algorithm in which each pair of adjacent elements is compared and the elements are swapped if they are not in order. Bubble sort algorithm is not suitable for large data sets as its average and worst-case complexity are of Ο(n2) where n is the number of items. The order can be ascending or descending.

How does Bubble Sort work?

The basic structure of the Bubble Sort Algorithm

In the above code, all possible comparisons are made even if the array is already sorted. It increases the execution time. The code can be optimized by introducing an extra variable swapped. After each iteration, if there is no swapping taking place then, there is no need for performing further loops.

In such a case, the variable swapped is set false. Thus, we can prevent further iterations. The algorithm for optimized bubble sort is

Bubble Sort is one of the simplest sorting algorithms. Two loops are implemented in the algorithm.

Space complexity is O(1) because an extra variable temp is used for swapping. In the optimized algorithm, the variable swapped adds to the space complexity thus, making it O(2).

Bubble sort is used in the following cases where