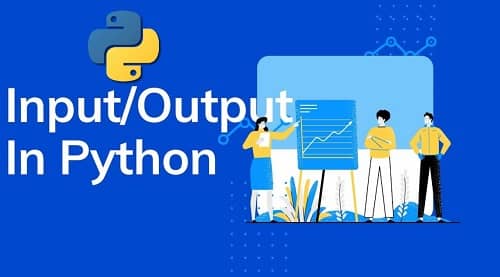 This tutorial focuses on two built-in functions print() and input() to perform the Input Output and Import task in Python. Also, you will learn to use them in your program.

Python provides numerous built-in functions that are readily available to us at the Python prompt. Some of the functions like input() and  print() are widely used for standard input and output operations respectively. Let us see the output section first.

We use the  print() function to output data to the standard output device (screen). We can also output data to a file, but this will be discussed later. An example of its use is given below.

Output : This sentence is output to the screen

Another example is given below:

In the second  print() the statement, we can notice that space was added between the string and the value of variable a. This is by default, but we can change it. The actual syntax of the print() function is:  print(*objects, sep=' ', end='\n', file=sys.stdout, flush=False).

Sometimes we would like to format our output to make it look attractive. This can be done by using the  str.format() method. This method is visible to any string object.

Here, the curly braces {} are used as placeholders. We can specify the order in which they are printed by using numbers (tuple index).

We can even use keyword arguments to format the string.

We can also format strings like the old  sprintf() style used in the C programming language. We use the  % operator to accomplish this.

Up until now, our programs were static. The value of variables was defined or hard coded into the source code. To allow flexibility, we might want to take the input from the user. In Python, we have the  input() function to allow this. The syntax for  input() is:

where  prompt is the string we wish to display on the screen. It is optional.

Here, we can see that the entered value  10 is a string, not a number. To convert this into a number we can use  int() or  float() functions.

This same operation can be performed using the  eval() function. But  eval takes it further. It can evaluate even expressions, provided the input is a string

When our program grows bigger, it is a good idea to break it into different modules. A module is a file containing Python definitions and statements. Python modules have a filename and end with the extension  .py. Definitions inside a module can be imported to another module or the interactive interpreter in Python. We use the  import keyword to do this. For example, we can import the  math module by typing the following line:

We can use the module in the following ways:

Now all the definitions inside  math module are available in our scope. We can also import some specific attributes and functions only, using the  from keyword. For example:

While importing a module, Python looks at several places defined in  sys.path. It is a list of directory locations.

We can also add our own location to this list.