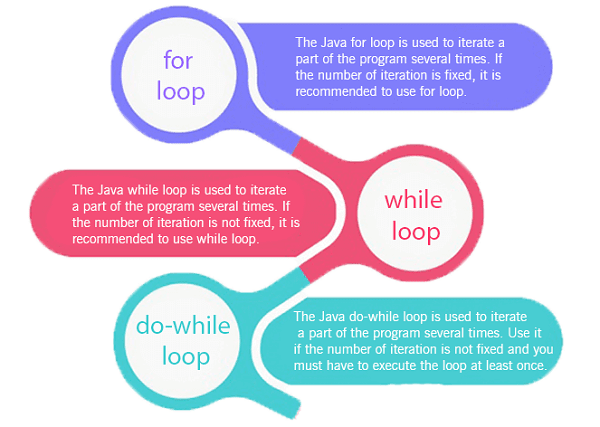 In Java, there are four important types of loops as following:

for Loop Statement: “for” Loop is one of the looping statement in java programming. “for” Loop checks the contrition and executes the set of the statements repeatedly until the condition is true. “for” Loop contain the following statements such as “Initialization”, “Condition” and “Increment/Decrement” statement.

infinite for Loop: If the test expression is never false, the “for” loop will run forever. This is called infinite for loop. Let’s take an example:

while Loop Statement: In java “while” is iteration statements like for and do-while. It is also called as Loop Control Statement. “while Statement” repeatedly executes the same set of instructions until a termination condition is met. “while” loop is Entry Controlled Loop because the condition is checked at the entrance. If the initial condition is true then and then only control enters into the while loop body.

Boolean Condition while Loop: We can put a single variable as a while condition but it must be of type boolean. thus the following statement will cause compile-time failure –

for each Loop Statement: The for each loop is generally used with a collection (e. g. array). By using the for each loop, you can access all elements of the collection without knowing the number of items in the collection. The example code below reads available font names from your computer and output them on the console window.

That’s all about Loop in Java. Thanks a lot for reading…