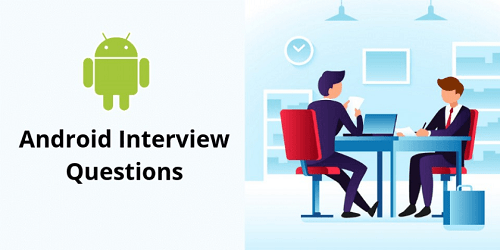 It is an open-sourced operating system that is used primarily on mobile devices, such as cell phones and tablets. It is a Linux kernel-based system that’s been equipped with rich components that allow developers to create and run apps that can perform both basic and advanced functions.

2) What Is the Google Android SDK?

The Google Android SDK is a toolset that developers need in order to write apps on Android-enabled devices. It contains a graphical interface that emulates an Android-driven handheld environment, allowing them to test and debug their codes.

3) What is Android Architecture?

The Android Framework is an important aspect of Android Architecture. Here you can find all the classes and methods that developers would need in order to write applications on the Android environment.

AAPT is short for Android Asset Packaging Tool. This tool provides developers with the ability to deal with zip-compatible archives, which includes creating, extracting as well as viewing its contents.

6) What is the importance of having an emulator within the Android environment?

The emulator lets developers “play” around an interface that acts as if it were an actual mobile device. They can write and test codes, and even debug. Emulators are a safe place for testing codes especially if it is in the early design phase.

7) What is the use of an activityCreator?

An activityCreator is the first step towards the creation of a new Android project. It is made up of a shell script that will be used to create a new file system structure necessary for writing codes within the Android IDE.

Intents display notification messages to the user from within the Android-enabled device. It can be used to alert the user of a particular state that occurred. Users can be made to respond to intents.

Activities can be closed or terminated anytime the user wishes. On the other hand, services are designed to run behind the scenes and can act independently. Most services run continuously, regardless of whether there are certain or no activities being executed.

11) What items are important in every Android project?

These are the essential items that are present each time an Android project is created:
– AndroidManifest.xml
– build.xml
– bin/
– src/
– res/
– assets/

12) What is the importance of XML-based layouts?

The use of XML-based layouts provides a consistent and somewhat standard means of setting GUI definition format. In common practice, layout details are placed in XML files while other items are placed in source files.

13) What are the containers?

Containers, as the name itself implies, hold objects and widgets together, depending on which specific items are needed and in what particular arrangement is wanted. Containers may hold labels, fields, buttons, or even child containers, as examples.

Orientation, which can be set using setOrientation(), dictates if the LinearLayout is represented as a row or as a column. Values are set as either HORIZONTAL or VERTICAL.

15) What is the importance of Android in the mobile market?

Developers can write and register apps that will specifically run under the Android environment. This means that every mobile device that is Android enabled will be able to support and run these apps. With the growing popularity of Android mobile devices, developers can take advantage of this trend by creating and uploading their apps on the Android Market for distribution to anyone who wants to download it.

16) What do you think are some disadvantages of Android?

Given that Android is an open-source platform and the fact that different Android operating systems have been released on different mobile devices, there’s no clear-cut policy on how applications can adapt to various OS versions and upgrades. One app that runs on this particular version of Android OS may or may not run on another version. Another disadvantage is that since mobile devices such as phones and tabs come in different sizes and forms, it poses a challenge for developers to create apps that can adjust correctly to the right screen size and other varying features and specs.

ADB is short for Android Debug Bridge. It allows developers the power to execute remote shell commands. Its basic function is to allow and control communication towards and from the emulator port.

18) What are the four essential states of an activity?

ANR is short for Application Not Responding. This is actually a dialog that appears to the user whenever an application has been unresponsive for a long period of time.

20) Which elements can occur only once and must be present?

Among the different elements, the and elements must be present and can occur only once. The rest are optional and can occur as many times as needed.

21) How are escape characters used as attributes?

Escape characters are preceded by double backslashes. For example, a newline character is created using ‘\n’

22) What is the importance of settings permissions in app development?

Permissions allow certain restrictions to be imposed primarily to protect data and code. Without these, codes could be compromised, resulting in defects in functionality.

23) What is the function of an intent filter?

24) Enumerate the three key loops when monitoring an activity

25) When is the onStop() method invoked?

A call to the onStop method happens when an activity is no longer visible to the user, either because another activity has taken over or if in front of that activity.