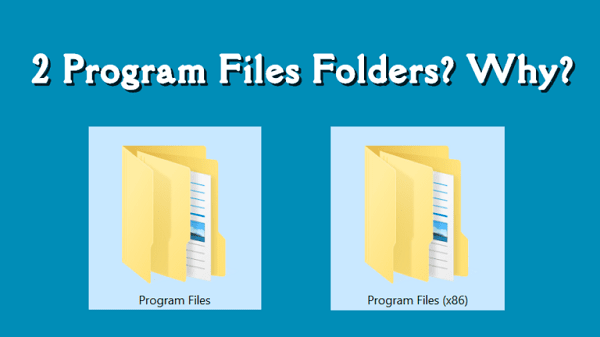 Short Bytes: Ever wondered why 64-bit Windows needs to have two Program Files folders? This is done to separate the 32-bit DLLs executables from 64-bit DLLS. It also eliminates the chances of a 32-bit application trying to load a 64-bit DLL, fail, and give an error message.

Back in 2005, Microsoft launched both 32-bit and 64-bit versions of the Windows operating system. This was done to support new 64-bit CPUs. The 64-bit CPUs have the ability to work with large numbers and access more memory.

If you’re running a 64-bit Windows operating system, you might have noticed that your PC has two Program Files folders. One is the regular Program Files and the other one is Program Files (x86). But, why is it necessary? What’s the difference between these two folders?

Well, to answer these questions, one should understand that 64-bit applications are compiled differently. While a program with 64-bit instructions can’t be read by PCs with 32-bit CPUs, a 32-bit program can be read by a 64-bit CPU.

Why Windows have a separate Program Files (x86) folder?

Whenever you install any program on a computer with a 64-bit CPU, its folders are, more or less, intended for 64-bit content. When a 32-bit program tries to use a 64-bit component, it faces some problems.

Another reason is that 64-bit software doesn’t act nicely with 32-bit extensions and vice versa. It reduces the chances of a conflict if you happen to install both 64-bit and 32-bit versions of a program on the same system.

Last but not the least, having two separate Program Files folders ensures that 32-bit applications that don’t know about the 64-bit system work. Separating both kinds of applications will eliminate the chances of a 32-bit application trying to load a 64-bit DLL, fail, and give an error message.

Apart from the Program Files, there are some other Windows components that have both 32-bit and 64-bit copies. Some of these are stored in winsxs (stands for windowsside by side) and syswow64 (Windows 32 on Windows 64).

Did you find this article on Windows Program Files folders interesting? Don’t forget to share your views and feedback.