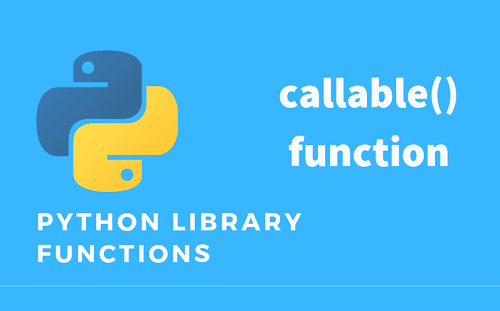 In programming, a callable is something that can be called. In this post, we want to discuss Python callable() Explained.

In Python, a callable is anything that can be called, using parentheses and maybe with some arguments. Functions, Generators, and Classes are inherently callable in Python. The  <a href="https://www.w3schools.com/python/ref_func_callable.asp">callable()</a> method takes an object and returns a boolean.

Since functions are callable in Python.

This indicates that every time we create a function, Python creates a callable object for it. You can also verify the presence of __call__ attribute.

Similarly for a Class,

However, if you create an object and run the callable() method over that then you will observe that class objects are not inherently callable in Python.

If you try to call the object with parenthesis you will get an error message saying the object is not callable.

However, we can create classes having the __call__ method which makes instances of the class callable.

Now if you call the object the __call__ method will run.