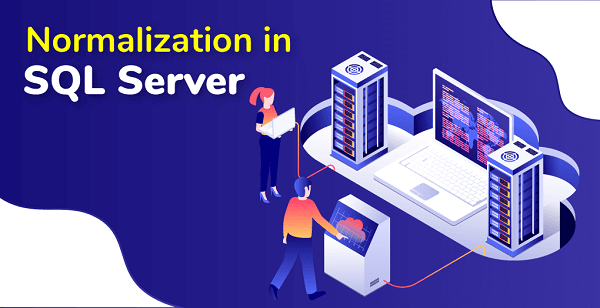 In this post, we want to discuss benefits, uses, levels of Normalization, and Denormalization. Before we get started, if you want to know about SQL rowversion, please go through the following article: What is rowversion in SQL Server?

By normalizing a database, you arrange the data into tables and columns.  You ensure that each table contains only related data. If data is not directly related, you create a new table for that data.

For example, if you have a “Customers” table, you’d normally create a separate table for the products they can order (you could call this table “Products”). You’d create another table for customers’ orders (perhaps called “Orders”). And if each order could contain multiple items, you’d typically create yet another table to store each order item (perhaps called “OrderItems”). All these tables would be linked by their primary key, which allows you to find related data across all these tables (such as all orders by a given customer).

There are many benefits of normalizing a database. Here are some of the key benefits:

Example of a Normalized Database

When designing a relational database, one typically normalizes the data before they create a schema. The database schema determines the organization and the structure of the database – basically how the data will be stored. Here’s an example of a normalized database schema: 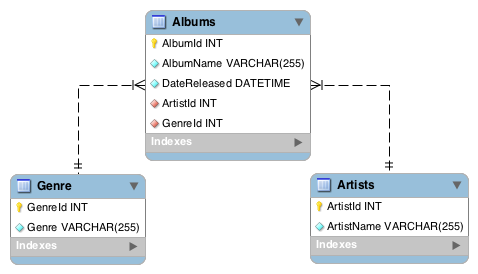 A basic schema diagram of a normalized database. This schema separates the data into three different tables. Each table is quite specific in the data that it stores – there’s one table for albums, one for artists, and another that holds data that’s specific to the genre. However, because the relational model allows us to create a relationship between these tables, we can still find out which albums belong to which artist, and in which genre they belong.

If we denormalize this database so that all three tables are combined into one table, we might have a table like this:

While this denormalized database can still be useful, it does have its shortcomings. You’ll notice we have to repeat the artist name for every album an artist has released. We also repeat the genre across multiple albums. This tends to require more storage space than a normalized database. But it can be also troublesome when inserting, updating, or deleting data. In particular, it can result in the following three anomalies:

The User is Unaware of the Normalized Structure

In a normalized database, the data is usually arranged independently of the users’ desired view of that data. This is one of the principles of relational database design.In fact, E.F. Codd’s 1970 paper A Relational Model of Data for Large Shared Data Banks (which introduced the relational model for the first time) starts with this line: Future users of large data banks must be protected from having to know how the data is organized in the machine (the internal representation).

So for example, just because a user wants to see a list of albums grouped by artist, this doesn’t mean that the database must arrange the data in that way. Besides, users will usually want to see the data represented in many different ways, depending on the task at hand. The same user might later want to see a list of albums grouped by genre. Indeed, a user’s query results could look just like the “denormalized” example above, even though the source data was spread across multiple tables.

The user might then run a report that presents the same data in a completely different way. Example of a report in Microsoft Access. The report displays a list of albums, grouped by artist. In both cases, the user can view the data exactly as desired, regardless of its normalized structure within the database. Another benefit of this approach is that it’s possible to make changes to the underlying data structure without affecting the users’ view of that data.

3NF is strong enough to satisfy most applications, and the higher levels are rarely used, except in certain circumstances where the data (and its usage) requires it.

Normalization can also be applied to existing databases that may not have been normalized sufficiently, although this could get quite complex, depending on how the existing database is designed, and how heavily and frequently it’s used. You may also need to change the way the normalization was done by denormalizing it first, then normalizing it to the form that you require.

When to Normalize the Data

Normalization is particularly important for OLTP systems, where inserts, updates, and deletes are occurring rapidly and are typically initiated by the end users. On the other hand, normalization is not always considered important for data warehouses and OLAP systems, where data is often denormalized in order to improve the performance of the queries that need to be done in that context.

When to Denormalize the Data

There are some scenarios where you might be better off denormalizing a database. Many data warehouses and OLAP applications use denormalized databases. The main reason for this is performance. These applications are typically used to run complex queries that join many tables together, often returning extremely large data sets. There may also be other reasons for denormalizing a database, such as implementing certain constraints that could not otherwise be implemented. Here are some common reasons you might want to denormalize a database:

So, while normalization is usually considered a “must-have” for OLTP and other transactional databases, it’s not always considered suitable for certain analytical applications. However, some database professionals oppose the notion of denormalizing a database, claiming that it’s unnecessary and does not improve performance.